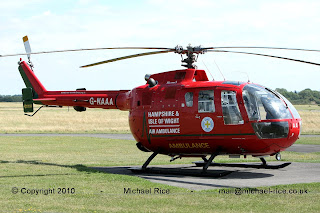 Looks like G-TVAM has been replaced for a while by G-NAAA as the latter has had Hampshire & IoW titles applied to it, one assumes that Bond wouldn't bother with such things if it wasn't going to be here for a while? It may be linked to the delivery of an EC135 later in the year or longer term problems with G-TVAM, or just simply a bit of a shuffle by Bond?

H500 G-LIBS should depart tomorrow in it's new metallic dark blue scheme, I assume initially back to EAH at Shoreham.

This blog sets out to try & keep up with the helicopter movements & activity at Thruxton Airport, near Andover, Hampshire.

With 10+ heli's based here & several companies onsite involved in either maintaining, operating or painting helicopters, there are numerous visitors.

Thruxton used to be a regular stop off point for power & pipeline survey aircraft, but not so much nowadays. It is also a regular stopping off point for fuel on the way to & from the South West and on race days although the airfield closes officially there are normally a few heli's attending the motorsport events throughout the year - so at times its a busy place!

If you need to contact me, please email - mail@michael-rice.co.uk

Heliwork Services Ltd. (formerly INAER UK Maintenance Ltd.) - a Bell, Robinson & AgustaWestland approved service centre, with Allison approved overhaul shop. Regular maintenance visits from a good number of aircraft, mostly Bell, Robinson, Enstrom, Schweizer & Agusta. In November 2013 a management buyout took the business name back to where it all began & a welcome return of the hangar signs with Heliwork on them was seen.

Edmondson Aviation Ltd. - specialist aviation paintshop with a well established track record of excellent, quality work on all types of light aircraft. They carry out all kinds of contracts from complete bare metal repaints to minor scheme changes & paint repair. With such a good reputation, Simon & his team are never short of work. They have consistently been very busy for the last couple of years with 30+ aircraft being completely repainted annually. I think they produce the best quality work in the UK today, given their client list, and a healthy order book, I am sure everyone else in the industry thinks that as well.

Heli Air Ltd. – national training school taking over the old established, but now defunct FAST Helicopters base that was.

Hampshire Air Ambulance - the service started on July 1st 2007 using a Bond Air Services Eurocopter Mbb Bo105 - G-NAAB, this provided a long awaited HEMS cover for my home county for the first few years. Initially the service was for 5 days per week, as of December 2007 it went full time to 7 days a week. As of 2010 it operates with an EC135T2+ - G-BZRS. The long awaited new aircraft EC135T3 G-HIOW (1190) was imported in late August 2015 & started operating in October 2015, with night mission capability as well. The service appears to have been incredibly busy since it started, not a day has gone by when I haven't seen the aircraft speeding over the skies of Andover to or from a job.

Recovair Ltd. - aircraft recovery and transporter operation, very intolerant of enthusiasts as they undertake work which can sometimes be of a sensitive nature.

Composite Technology Ltd. – closed in October 2019 with all business being transferred to the US operation. However, in December 2019, I heard that there may be some good news as the building & tooling may have been bought, and a new business could soon start up doing much the same work on site.